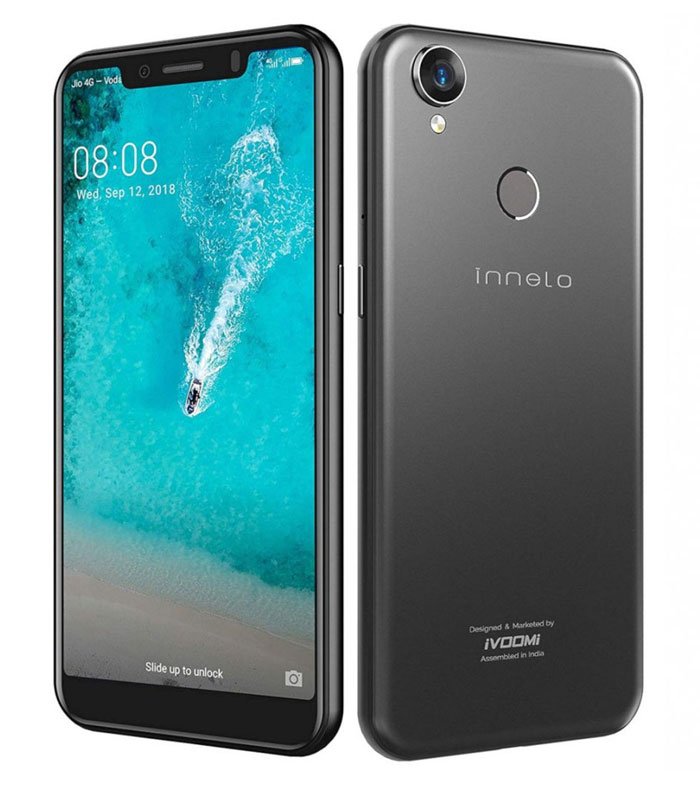 The iVoomi Innelo 1 is a phone with very good specs however there have been a few short complaints about its touchscreen but these have been few and far between. In terms of cost and comparing to other phones from iVoomi, the Innelo 1 fits in well by price and specifications. The phone was released in 2018 and was released in India as well. The phone has a good battery with 3,000 mAh battery as well as being very light at 154 grams. See other iVoomi mobile phone specifications on this website.

The display is large with a higher than normal resolution at 720 x 1520 pixels compared to the latest high end phone the iVoomi Z1 which is only at 720 X 1498 pixels. The screen on this phone is also slightly larger at 5.86 inches to 5.67 inches. Yes its a touchscreen with a good aspect ratio of 19:9. The only question that this brings up is the battery life, as this phone has 3,000 mAh with a much larger screen compared the the smaller screen on a 2,800 mAh battery on the Z1.

The phone comes with a 1.3 GHZ quad core processor which is the Mediatek MTK 6737H. This processor is not as powerful as the one on the Z1 as it is a quad core ARM-A53 @ 1.1-1.3GHz processor and an Arm Mali-T720 GPU. There is also 2GB of RAM as well as 16GB of storage which you can expand to a 128 GB storage ability using a microSD card.

The camera on the phone is good enough with a 13 MP on the rear as well as a 5 MP on the front. There is also a rear flash on the camera. This is all powered by a Android 8.1 operating system as well as a SmartMe OS 3.0 skin software. There are other sensors as well such as a Face Unlock, finger print sensor as well as an accelerometer.

The mobile phone comes with WiFi as well as GPS and Bluetooth. There are two or dual SIM’s and they can both be used for GSM,GPS as well as 4G/LTE and both support 4G in India (Band 40). Note that certain phone do not support all such as the specs of the iVoomi ipro.