The specifications of the ZTE Blade A7 GSM has been added below. You will note that it comes with a 3200 mAh battery and powered by the MediaTek Helio P60 processor which has 4 cores clocked at 2GHz and 4 cores clocked at 2GHz. It also comes in three colors being Night Black, Sea Blue as well as Star Black. There is also 32GB internal storage as well as being expandable to 256GB of external memory. The phone is also a dual SIM (nano-SIM) mobile phone. 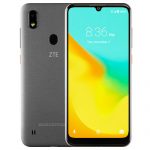 The ZTE Blade A7 GSM has a medium-sized display at 6.00 inches and with an odd resolution of 720 x 1560 pixels. The ZTE Blade A7 was released in May 2019 and the market it is catering for is the lower to mid-range price market.

You will notice this reflected not only in the size and resolution of the screen but also on its memory and camera resolution. It is a touch screen with a low resolution than the newer phones of today. There are a number of ZTE mobile phones listed on this website.

The processor is the same that has also been used on the Vivo V11 GSM as well as the ZTE Blade 10 Prime mobile phone. The mobile phone can also be setup for the Hutch network. So see the MMS settings for Hutch which you can also find on this website.

The camera specifications on the ZTE Blade A7 is very basic. There is a 16-megapixel rear camera with a flash and also a front camera of 5 megapixels which is good enough for selfies. The storage space you will need to expand if you are going to put these cameras to good use as the internal space is not that big as stated before.