The ADCOM IKON 4 is a mobile phone in the bottom end range which is mainly imported into India. Its reviews are not so good and the main complaints have been that it feels cheap and that the build quality is not very good. The mobile phone looks like the older iPhone designs but without the side buttons that you are used to. The phone only supports 3G however it will accept a 4G SIM from Airtel. The phone does support Facebook and WhatsApp. Also the phone comes in two colours being gold and white. 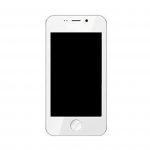 attraction. The older iPhone look has also caused some confusion and some people thought that they could install iPhone apps onto the phone however since this is not an Apple phone even though it has an Apple processor, that is not possible. The Ikon4 has 1 GB of RAM with 8 GB internal storage running on an Android OS.

The rear camera is a 5 MP camera with a 1.3 MP front facing camera. The phone is powered by a 1,500 mAh battery which will last for a while. Again, the quality on this phone has been an issue with buyers and their reviews are mixed however considering the price on these phones you have to accept certain limitations such as no 4G and the front camera being only 1.3 MP so its not going to be very good. The Ikon 4 is a good budget phone and offers what one can expect at these types of prices. See other Adcom mobile phone specifications on this website.