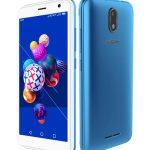 The iVoomi iPro was released in September 2018 at around the same time as the Z1 version as this is a lower spec version of a good phone. This phone is however a bit cheaper than the other because of the lower specifications.

The form factor is a touchscreen mobile phone and comes in at 140 grams for the phone. The battery capacity is also very good considering the specs of the iVoomi iPro as 2,000 mAh. There are also three colours which the phone comes in.

The phone comes with a rear camera as well as a rear flash with autofocus. Both the front as well as the rear cameras are 5 MP cameras. All of this runs on the Android 8.1 Oreo as well as Smart Me OS 3.0 skin.

There is WiFi as well as GPS as well as Bluetooth. For some odd reason there is an FM radio which is not very common any more. Note also that there are two SIM’s on this phone however they are not the same. Both SIM’s make use of a Nano-SIM, GSM as well as 3G. SIM 1 however provides support for 4G in India (Band 40) but not SIM 2. Check with the seller again before you buy if you wish to use both of these SIMs for 4G.

Overall a very useful mobile phone for the price on offer. There are not many sensors on the phone as it only offers a proximity sensor and not an accelerometer.  Always check the specs of the phone and consider what you are going to need in your price range. The iVoomi iPro phone is both reasonable and performance is adequate all within a price you can afford.