You can see on the size of the phone that this is a standard Motorola size mobile phone. It offers the Single SIM (Nano-SIM) 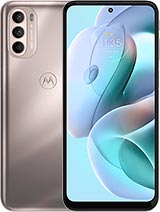 or Hybrid Dual SIM (Nano-SIM, dual stand-by). This also comes in the water-repellent design from Motorola. The phone comes with an AMOLED screen while many others have the IPS LED the AMOLED has a better screen. The resolution on this phone is good ar 1080X2100 pixels and a 411 ppi.

In terms of hardware there is the venerable MediaTek Helio G85 which is also powered by the Mali-G52 MC2 GPU. This process much like others offers better power management with its big and small cores. There are 2 cores which run at 2GHz (Cortex-A75) and then 6 cores which run at 1.8GHz (Cortex-A55). This is an octa-core process with all 8 cores working together. When there is no need to power the CPU will power down the cores that are not needed. It will only use the larger cores when the power is required. This saves battery drain and means less recharging.

In brief there are also two options with this phone when it comes to memory. On one hand there is the 4GB RAM version and the 6GB RAM version. In like manner the storage space on both versions are the same at 128GB space. On the positive side, yes there is also a shared SIM slot for the microSDXC. In conclusion there are three cameras on the front and a selfie camera. Finally there is also all the usually sensors with a fast charge ability.