Firstly the Samsung Galaxy is powered by a Qualcomm SDM720G processor also known as a Qualcomm Snapdragon 720G. This is a (2 x 2.3GHz + 6 x 1.8GHz) octa core processor. 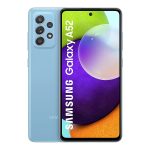 This is a fast mid-range ARM-based SoC. There is also a Adreno 618 GPU.

In terms of memory there is 6GB RAM as well as 128GB internal memory which is expandable to 1 TB. This is also a Dual SIM (nano+nano) dual-standby (4G+4G) which is very useful if you have a business as well as a home phone. They are capable of 4G and both use the nano SIM.  The phone is powered with the Android 11, v11.0 operating system.

The camera setup is a 64MP+12MP+5MP+5MP Quad camera setup. The main camera is the 64MP camera + 8MP which is an Ultra wide camera and finally there is a + 5MP depth camera as well as a  + 5MP Macro Camera which is useful for very close shots. The selfie camera or front facing camera is a 20MP camera.

Note that it does not comes with 25w charging but supports it. It does however come with a 15W charger. So it takes about one and a half hours to recharge to full. Also note that there is no wireless charging and the phone does have an earphone jack. The phone also has NFC charging. In terms of storage technology it has UFS 2.1 as well as Corning Gorilla Glass 5. This is not a 5G phone.