The Xperia C3 Dual user manual mobile phone is one of the latest mobile phones from Sony. The mobile phone comes with an array of high end features such as a built in 5MP front facing camera and an 8MP rear camera. The Xperia C3 is also powered by a Snapdragon 1.2 GHz Qualcomm Quad-core processor and with a standby time of more than 1,000 hours makes the phone very energy efficient.

We have added the Xperia C3 Dual User Manual below. 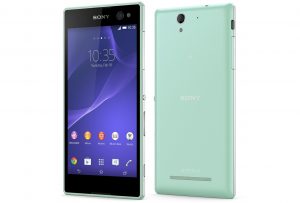 image sensor. The LED is also a pulsed flash so you do not get a whiteout when taking photos with the camera. With its 8MP camera it can also zoom in at 16x digital zoom and comes with object tracking which has become standard on most high end mobile phone.

With red-eye reduction and geotagging the phone was clearly designed for multimedia connected to the internet for Twitter of Facebook. Image capture is in JPEG format but the Xperia C3 also reads BMP, GIF, JPEG, PNG; WebP. Its video capture is in either file formats: 3GPP, MP4. The phone does however also play the following video formats being: 3GPP, MP4, M4V, AvI, XVID, WEBM.

The Xperia C3 Mobile phone from Sony comes with 1GB of memory and an 8GB flash memory which is internal. This is a huge amount of internal memory for a mobile phone. There is also a card-slot for a 32GB microSD card. As stated above the phone comes with a Adreno 305 and Snapdragon 1.2 GHz Qualcomm Quad-core processor. With this amount of power and memory this phone will last you many years while running Google Android 4.4 (KitKat).

The phone comes with Sony Surround Sound technology (VPT) and also the Clear Audio+ – Sound improvement software for the phone. It also plays the AAC, AMR-NB, AMR-WB, FLAC, MIDI, MP3, PCM, Vorbis, WMA audio formats and records in the 3GPP, MP4, AMR formats. The cunnectivity of the phone includes all the latest being:

This is today standard with all mobile phones. The ActiveSync is good if you are on Facebook or on Google alot. This allows you to sync your media files with your online accounts. You have to monitor your bandwidth usage though if you are paying your provider per GB or per MB though. If you are looking for a phone with a little less specs and also cheaper you could also look at the Xperia T3 mobile phone on this website.