The multimedia is different as well as the sound and other options on this mobile phone. 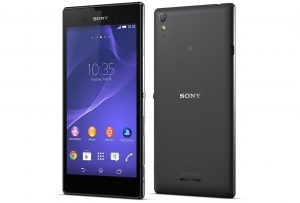 The Xperia T3 mobile phone comes with an 8MP rear camera and a 1.1MP front camera. Like most mobile phone today it also comes with Geotagging of your photos and videos which is great for Facebook or Twitter. There is also an image and video  stabiliser which is a very useful feature for video so you don’t get shaky video. There is also HD recording and with 5GB internal storage makes for a great multimedia phone. Red-eye reduction is a standard feature as well as object tracking. There are 2 video recording formats being the 3GPP, MP4 formats as well as image viewing of the BMP, GIF, JPEG, PNG, WebP formats. The phone takes photos in the JPEG format.

The Xperia T3 comes with a Snapdragon 1.4 GHz Qualcomm Quad-core running on the Google Android 4.4 (Kitkat) operating system. There is 1GB of memory (RAM) in the phone with 5GB of usable storage on the phone and also a slot for a 32GB microSD card. The phone comes with a large display being a 5.3″ HD (1280×720) display and with a standby time of 688 hours the phone makes for a good long term investment.