If you ever wanted something similar to an emulator which was very popular in the 1980’s when computers started to become mainstream then the new Android emulator for your computer is the next step. The Bluestacks application allows you to run your mobile phone applications on your computer. With thousands of applications to run the software from Bluestacks has become very popular. See how to change your WhatsApp picture.

The applications on your computer tend to run much more faster on your computer as the processor is more powerful. Most apps are very easy to control as it can be controlled with a mouse of a keyboard. There is also a Windows and a Mac version for the software. See also the LG g360 manual here.

The interface is attractive enough and easy to use for even the novice  computer player. The apps are easy to organise in folders and also to launch any of the apps on your computer. With more than 90 million installs this is the best on the market by far. 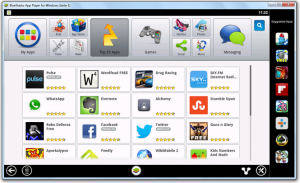 Pros: The apps launch into a  high quality screen view on your laptop and computer.

Cons: If your apps are touchscreen only then certain games will not work well. There are a number of other players on the market however Bluestacks still has the widest compatibility on the market and is still the leader in it field.