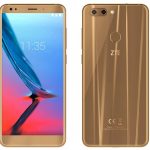 The hardware on the Qualcomm Snapdragon 450 is a 1.8 GHz octa-core processor. The phone also comes with 3GB of RAM or memory and 32GB of internal storage. This storage is also expandable via the microSD card slot of the mobile phone.

The specs of the ZTE Blade V9 GSM shows it to be a mid-range telephone from ZTE. With the 5.7 inch screen and a touchscreen resolution of 1080 x 2160 pixels, the phone has excellent viewability.

The mobile phone has dual SIM slots that use a nano-SIM on both slots. These are both 3G as well as 4G enabled. The phone also sports WiFi, GPS as well as Bluetooth version 4.20. there is also the standard 3.5mm headphones jack and an FM radio. WiFi direct is also available on this phone. There is also MicroUSB as well as a compass, proximity sensor as well as an accelerometer and a gyroscope. Note the microSD slot as well as a fingerprint reader. See also how to setup your Airtel SMS settings on the V9 mobile phone.