The Vivo V15 Pro GSM specifications make it a high-end mobile phone which comes with a 3700 mAh battery which considering what the phone has to offer makes good on its ability between recharges. The phone is a bit heavier than normal at 185 grams which is about 30 grams more than the average mid-range mobile phone. The Vivo V15 Pro GSM is clearly not your average phone. The phone comes with fast charging and comes to two colours – Ruby Red, Topaz Blue. 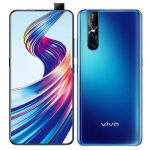 The phone was released this year in February 2019 so the price is still going to be a bit high for the first year after the release. With a 6.53 inch full-HD+ screen with a 1080×2340 pixels display powered by a octa-core Snapdragon 675 SoC, what more could you want?

The Vivo V15 Pro is a top of the range mobile phone from Vivo. Note that this Pro version and not the specifications for the Vivo V11 Pro which is also on this website. It comes with a large screen 6.39 inches in size and with a resolution of 1080 x 2340 pixels. This is an excellent screen that is large enough to take advantage of the processor ability as well as those of the camera package.

The hardware on the Vivo V15 Pro mobile phone is very good as it is powered by a Qualcomm Snapdragon 675 which is a 2 GHz octa-core processor. The phone also comes with 6GB of memory which is good if you are going to use this mobile phone as part of a home office or for raking and editing photos on your mobile phone. The specifications of the Vivo V15 Pro extend to its storage ability with 128 GB of internal storage. There is a dedicated microSD slot which makes the Vivo V15 Pro expandable to 256GB of storage space.

The Vivo V15 Pro much like other mobile phones from Vivo comes full connected with dual SIM’s. There is WiFi as well as 3G and 4G which is used in India. There is also GPS and Bluetooth Version 5. Let not forget that it has a head phone jack as well as micro USB and an FM radio. It pretty much standard much like the specs of the Vivo V11 Pro and the specs on the Vivo V11 as well. All of this using a nano-SIM.

The Vivo V15 Pro comes with face unlock as well as a fingerprint scanner. There is also a compass, proximity sensor as well as a gyroscope and an ambient light detector. If you wanted a loaded mobile phone then the Vivo V15 Pro is the first on the list.