The Vivo V9 GSM specifications below make for a great mobile phone. The Vivo V9 specs shows that it has a 3260 mAh battery which allows the phone to last a long time before it needs to be recharged. The phone comes in a number of colours such as Black, Gold, Pearl Black and Sapphire Blue. At 150 grams the phone is very light and having come to market in March 2018 makes the price now more than reasonable. 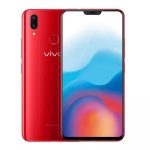 Note that the phone does not have a removable battery. You will need to consider this when buying the phone that its got a non-removable battery. The phone has a good camera with sound quality and also a very good processor in the form of the Snapdragon 626.

The Vivo V9 GSM is powered by the Qualcomm Snapdragon 626 processor which is a 2.2Ghz Octa-Core CPU. The Vivo V9 comes with 4GB of memory and internal storage of 64GB which is expandable to 256GB on an microSD card. The reason for this larger storage space is because the camera is much better than other mobile phones in the Vivo mobile phone range. You will not this on the specifications as listed below. You can compare this to other models on this website.

The Vivo V9 has all the bells you could expect. There is WiFi as well as GPS and USB connectivity. This is also a dual SIM mobile phone from Vivo as you can see from the Vivo V9 specifications below. The phone also has an FM radio which is a bit rare today on mobile phones and there is also GSM connectivity. Yes the Vivo V9 does support 4G in India if that is what you are looking at in your mobile phone.