The Nokia 7230 is another slide phone much like the slide Nokia 2220 phone which also came out in 2010. The slide phones had been very popular when they came out and so was the Nokia 7230.The phone has a TFT screen with 256k colours which is much higher than the Nokia Asha 202 phone. Its got a large screen being 240×320 pixels and comes with MP3 ringtones and vibration ring modes.

There is also a loudspeaker which is standard with a 3.5mm jack. There is a card slot for 16GB of space with 2GB as standard when you buy the phone and 45MB internal. If you are buying a secondhand phone then check the size of the card in the slot to see if they have included the 2GB card with the phone. Most times re-sellers remove the card and try to sell it to you as a separate sale. The 7230 comes with GPRS Class 32 giving it a good speed of 100kbps and also EDGE Class 32 with 384kbps speed. There is also Bluetooth and USB. For such an old phone the speed by today’s standards are still good. 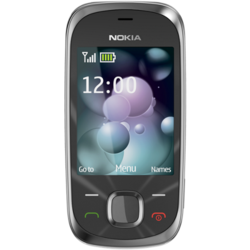 The 7230 also comes with a camera being a 3.15 MegaPixel camera which is not top of the line as the phone was not designed for multimedia even when it came out. The video camera runs in QCIF and only at 8fps which is very slow. Maybe it was cost but they could have done much better on the camera in my view. There is an FM radio but note that there is no GPS on the phone but it does come with Java.

The Nokia 7230 was a basic phone when it came out and was clearly not designed for multimedia however it does have a standby time of 2 weeks and a talk time of 5 hours which is good.

The price range today is is in the US$100 price range. The user manual for the phone is below so you can see if you like the features on the phone before you go out and buy one. There is the software on this website called the Nokia PC Suite which you can install on your computer to connect to the phone.