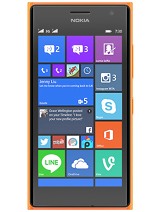 The Nokia Lumia 730 runs on Microsoft Windows Phone 8.1 and is powered by a Qualcomm Snapdragon 400 chipset and a Quad-core 1.2 GHz Cortex-A7. Note that this is not the upgraded Snapdragon 410 chipset. The phone also uses the Adreno 305 GPU.

The mobile phone comes with a card slot for a microSD with up to 128 GB of storage space and comes with large storage space and RAM being 8 GB with 1 GB RAM. The phone comes with a 6.7 MP (6.1 MP effective), 2848 x 2144 pixels camera from Carl Zeiss optics. The camera also comes with autofocus as well as an LED flash. The video quality is good on the phone with a frame rate of 1080p@30fps with stereo sound recording abilities. The secondary camera on the phone is also very good as most manufacturers tend to use a standard low quality VGA camera, Nokia instead has used a 5MP with 1080 pixels.

The connectivity on the phone is with Wi-Fi 802.11 b/g/n with DLNA and hotspot support. There is also Bluetooth as standard being Bluetooth v4.0, A2DP, LE/ apt-X after WP8 Denim update and also come with A-GPS, GLONASS and Beidou. There is also a microUSB v2.0 and an FM radio which Nokia has tended to leave out of its phones over the past few years.

There are also a couple of sensors which you tend to find in mid-range phones such as an accelerometer, gyro, proximity sensor as well as a compass. With a Li-Ion 2200 mAh battery as well as a 600 hour standard by time and 22 hour talk time makes for an overall great mobile phone.