The Nokia C3 reminds me about the Blackberry design which became very fashionable in 2010 when the slide phones where starting to fall out of fashion. Nokia made a number of mobile phones in this design in those years.

Nokia and the Nokia C3 was no different. The other phones in the Nokia range which followed these designs had been the Nokia Asha 205 and also the Nokia Asha 302 which is still big. The designs and fashion since then have changed to large multitouch screens.

The Nokia C3 came with a standard 2G network ability with nothing really fancy about the phone. It had a TFT screen which was also run of the mill with 256K colour and a nice large screen being 320×240 pixels. It had a microSD card slot with 2GB as standard but could go up to 8GB in storage space. The phone also came with Class 32 GPRS and EDGE and Wi-Fi 802.11 b/g and also Bluetooth. 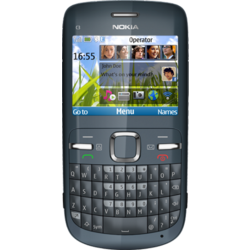 The phone also came with a standard 2MP camera which ran at 1600×1200 pixels and the video runs in QCIF at 15fps which is not very good but ok for the odd video clip. The phone also came with WAP, MMS and SMS and Java. There is no GPS on this mobile phone. The battery is good as it lasts when new for up to 30 days with no recharge needed when in standby and it has a talk time of just over 7 hours. Overall this was a good phone and still is.

The design has fallen away in favor of large multitouch screens but it is still a very good basic phone retailing for around U$100 each. The user manual is below if you wish to view all the other functions of the phone before you decide to buy a used model. If you want to connect the phone to your computer then you need to download the Nokia PC Suite to connect the phone to your computer for transfers and upgrades. The user manual below is in English and you can browse through the user guide to understand if this mobile phone will suit your needs.